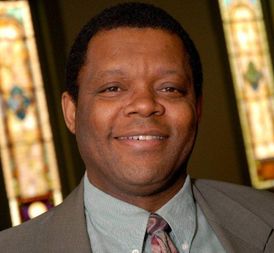 ​Pastor Michael ’s faith journey began at age seven when he was taken in by a Christian couple in Benton Harbor, Michigan, who introduced him to Christ’s mercy, grace, and love. The church has been a central focus of his life ever since. Throughout his college days, secular career, marriage, and raising a family, God’s call upon Pastor Ware’s life has been strong. As he taught Sunday School, served as moderator, sang in the choir, and listened to the struggles of a friend, he knew that God had a plan for him, and sharing Christ’s love was central to that plan. He organized and led local youth groups and became involved in coordinating and leading several state and national youth gatherings for the denomination.  Through the years, Michael often contemplated a career in the ministry; finally, he felt God’s call to be irresistible, so he enrolled in seminary.

Rev. Ware comes to NSBC from Webster Baptist Church in Webster, New York, where he served from 2006-2018 as the solo pastor of an integrated church.  He also served as Vice President of the Rochester/Genesee Region of the ABC.  During his tenure at Webster Baptist Church, he volunteered as a chaplain and firefighter for the Webster Fire Department.

Rev. Ware obtained a Bachelor of Arts degree in Political Science from Albion College in Albion, Michigan and a Master of Divinity from Colgate Rochester Crozer Divinity School in Rochester, New York. Michael enjoys traveling for mission, ministry, and pleasure. Outside of the United States, he has been to South Africa, Swaziland, El Salvador, Puerto Rico, Mexico, and Jamaica. Rev. Ware likes to play disc golf, do puzzles, and ride his bike. He is a devoted sports fan, especially the Dallas Cowboys, the Chicago Blackhawks, and the Chicago Cubs.

Rev. Ware is thrilled to be coming to North Shore Baptist Church as the English Language Pastor. He is dedicated to bringing energy, growth and spiritual renewal to the church through preaching, teaching, mission, and evangelism. Pastor Ware is passionate about making the church and its neighborhood part of the “beloved community.”