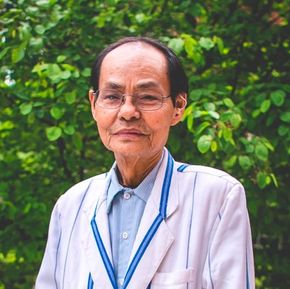 Rev. Roger Poenyunt grew up in the village of Ywaplaw in the Delta region of Burma (Myanmar). He graduated from Karen Theological Seminary in Insein, Ragoon in 1972. Then for 17 years he was a pastor in the village of Jakyainn in Karen State in eastern Burma. In 1989, however, the Burmese military attacked and destroyed his village.

​Pastor Roger, his wife Se See Lia, and the people of their village fled into the mountains, eventually making their way to the Umpiem Refugee Camp in Thailand near the border with Burma. There he started a new church, Wa Ley Karen Baptist Church, and worked as its pastor until his relocation to the United States in 2008. Pastor Roger, Se See Lia, and their two young adult children were assigned by their refugee agency to come to Chicago. He was delighted to find a large group of Karen refugees already gathering and encouraging one another at North Shore Baptist Church. He quickly began to serve as their pastor and soon organized a worship service in Sgaw Karen. He is also the Regional Director for the Midwest for the Karen Baptist Churches, U.S.A.

In December 2017, Pastor Roger retired from full-time ministry at NSBC.  He now serves as Pastor Emeritus, officiating weddings, baptisms, and presiding over Communion.

Pastor Roger can be contacted through the church office.